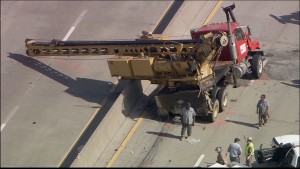 Two men were killed in separate truck accidents recently in the Fort Worth-Dallas area. On June 17, Santos Narvaez, 25, of Fort Worth died at the scene of an accident on 35W involving an 18-wheeler, according to the Star-Telegram.  The newspaper reported that he was in a Toyota Corolla that hit an 18-wheeler in Fort Worth near North Loop 820. Narvaez died after sustaining trauma to his head. The driver of the 18-wheeler was not injured.

In a second accident, Joseph Higginbotham, 70, of Dallas, died on the Dallas North Tollway on June 20. The accident happened after a truck with a drilling rig mounted on its bed blew a tire as it was traveling southbound, according to KHOU.com. After the blowout, the driver of the truck pulled into the left lane, but the crane's boom shifted and blocked one lane on the northbound side of the highway. Higginbotham died after his pickup truck hit the crane boom. There were no other injuries.

According to KHOU.com, Higginbotham was described as a handyman who was always willing to help out his neighbors. Fort Worth truck accident attorney Coby L. Wooten understands how devastating serious accidents can be on friends of victims and families who have lost loved ones. Families want answers. That's why it's important to begin an immediate investigation to make sure evidence doesn't change or disappear.

Families who lost loved ones can protect their rights by retaining an attorney as soon as possible. An experienced truck accident lawyer can enlist the services of accident reconstructionists and investigators who can visit the site and work on behalf of the families.

Coby L. Wooten has handled serious trucking accidents and has worked hard to get the kinds of results clients need.