Three separate truck accidents in early July resulted in the deaths of five people, including three members of an Indian-American family traveling near Kilgore, about 120 miles from Dallas. The accidents which were reported by the media illustrate how crashes involving trucks can have a devastating impact on people's lives. At Coby L. Wooten, Attorney at Law, P.C., our thoughts and prayers go out to the victims and their families. As an experienced Fort Worth semi-truck accident lawyer, Coby L. Wooten knows that victims and families who lost loved ones will want answers. Insurance companies for the trucking companies typically have a paid investigator on sight within minutes or hours of the crash. They will be looking for ways to minimize the liability of the trucking company. That's why victims need an aggressive and knowledgeable attorney on their side. Contact Coby L. Wooten if you or a loved one was injured or killed. 3 Members of Indian-American Family Die in Crash Outside of Kilgore   A woman driving a pickup truck allegedly was traveling in the wrong direction and struck a minivan carrying a family of four on July 10. Police say the driver of the pickup, Shelby Taylor, 22, of Henderson, was drunk at the time of the accident on Dudley Road, according to NDTV.  Police arrested her and charged her with two counts of intoxicated manslaughter, according to NDTV. According to NDTV, two children died at the scene of the accident: Ryera Patel, 6, and Trish Patel, 12. Their mother, Heema Patel, 43, died later at a local hospital. Ketanbahai Patel, the father of the children and driver of the minivan, sustained non-life threatening injuries, according to NDVT. Dallas, TX Man Killed in Accident in Arkansas Police say Ronnie L. Smith, 53, died in a July 9 accident on Interstate 40 in North Little Rock, Arkansas, after his Cadillac was rear-ended by a tractor trailer rig, according to ArkansasMatters.com. 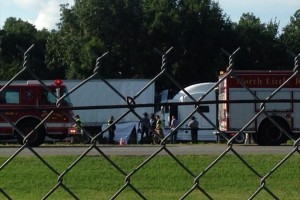 The police report states that five vehicles were traveling in the passing lane and only three slowed for traffic ahead. According to ArkansasMatters, police say Richard Hubbard, 42, of Valdosa, Georgia, was driving a Peterbilt tractor trailer that hit the rear of Smith's vehicle, which was pushed into the rear of a Freightliner tractor trailer, which struck another semi.  A fourth semi also was involved in the crash. Hubbard and Virgil Rankins, 49, of North Little Rock, the driver of the Freightliner, were injured in the accident, according to ArkansasMatters.com. The other two truck drivers were not injured. Amarillo Man Killed in Semi Truck Accident A July 9 semi-truck accident in Umbarger, Texas, resulted in the death of the driver, Justin Wayne Bryant, 32, of Amarillo, according to NewsChannel 10. The news report states that Bryant was operating a semi truck headed westbound on Highway 60 around 4:20 a.m. that skidded into the center median. The report states the truck turned over onto its left side after the driver cut sharply to the right. Police said Bryant was partially ejected from the truck and was pronounced dead at the scene. Contact Truck Accident Attorney Coby L. Wooten Trucking companies and their insurance carriers won't waste any time in getting to the scene of an accident to begin an investigation to protect the interests of the trucking company. That's why it's so important for family members who lost loved ones in accidents to retain an attorney who can protect their rights. If you were seriously injured in a truck accident or a loved one was injured or killed, you will need your own attorney and accident investigators and reconstructionists at the accident site as soon as possible. You will need to get an accurate account of what happened. You will need a lawyer with the experience and resources required to hold the responsible party accountable. Coby Wooten has years of experience handling complex trucking accident cases. If you or a loved one has been injured in a trucking accident, contact Coby L. Wooten, Attorney at Law, P.C., at 866-408-0940.