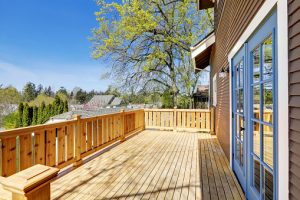 Summer is the season for people to enjoy time out on their deck. Decks can be a wonderful place to spend time, as long as they are safely built. Too many decks, however, are not built to code or have become rotted and dangerous over time. When homeowners or owners of public or private buildings invite guests over and allow them onto a deck, it is the obligation of the property owner to make sure the deck is safe and secure.

If the homeowner or property owner fails to identify hazards with the deck that a reasonable individual or business should have been aware of, it is possible the property owner will be held liable should anything go wrong. Premises liability laws determine specifics of the duty owed by property owners and can help victims to understand their rights after injuries sustained on unsafe decks.

Deck Collapse Can Cause Serious Harm

Chicago Tribune reported a deck collapse earlier this summer, which was likely caused by deteriorating nails. The collapse occurred in a rental home, which is also currently for sale for $1.15 million. It was a home near the water and a family was renting it for a beach vacation.

There were 24 extended family members on the deck of the beach home when the deck collapsed. Injuries ranged from cuts and abrasions to severe injuries, including broken bones. A mass casualty bus had to be brought to the home, which was located in a resort community, to load victims and get them to a medical center for treatment. Several of the victims were described as being in critical condition.

The deck was first constructed when the house was built in 1986 and reports indicate it was likely up to code at the time. The problem is, moisture, salt, and sand from the ocean caused the nails to begin to deteriorate. Building codes in the state do not require inspections to occur regularly to a property after it has been completed. Code enforcement authority will only come to investigate whether a deck or other structure is safe if there are complaints about it.

An investigation is ongoing in this case as to the specific cause of collapse. Results of the investigation could help determine who, if anyone, should be held liable for the collapsed deck and resulting injuries. The property is rented through a rental company, but the company has not made a statement.

If the rental company was responsible for inspection, maintenance and repairs of the property, it is possible the company could be sued in a premises liability lawsuit. If the owners of the property remain responsible for its condition despite the fact they are working with a rental agency, the owners will be held responsible. Victims could consider pursuing a claim against both the owners and property management company as well, which could provide the broadest base for recovering full and fair compensation for damages.