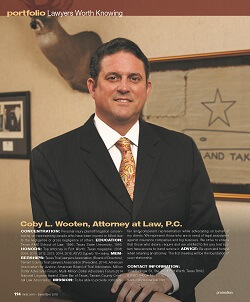 Attorney Coby L. Wooten was named to the prestigious 2015 Fort Worth, Texas magazine's "Top Attorney" list for his work representing people injured in accidents in Texas.

The magazine included the list of top attorneys in its December issue. Wooten and other attorneys who made the cut were nominated by their peers.  The magazine received 7,348 nominations and named 850 attorneys to the final list, according to Fort Worth, Texas.

Wooten has been named to the list seven times since 2008. He was named a "Top Attorney" in the category of personal injury - plaintiff. These are attorneys who represent an injured person, the plaintiff, and must prove a defendant is liable for the injuries suffered by the plaintiff and responsible for monetary damages.

In addition, last year he was named a 2014 Litigator Award winner, which is based on actual verdict and settlement dollar achievements.

"I am honored to join this list of highly skilled attorneys in the region," said Wooten, founder of Coby L. Wooten, Attorney at Law, P.C. "The 'Top Attorney' recognition reflects on my law firm's commitment to providing high quality representation for the injured and families whose loved ones died in accidents."